These days, social media has become a platform that can convert a commoner into a celebrity overnight. It’s just a matter of one Viral Video.

After Ranu Mondal Viral Video, another Video Went Viral where a man is sharing his Paragliding Experience in a funny way. This video is liked and followed by people so fast that it went Viral in just one day. Yes, We are talking about Vipin Sahu.

After the popularity of his viral video of Paragliding, Vipin Sahu appeared on Colors TV Comedy Show Khatra Khatra Khatra as a guest. Now, he will again appear on television on Colors Channel in a new show Mujhse Shaadi Karoge as a contestant. Vipin Sahu will propose Shehnaaz Gill for marriage in this show. Check Mujhse Shaadi Karoge Contestants List. But sadly, he will be rejected by Shehnaaz Gill.

Soon, Vipin Sahu will appear on MTV Roadies. He has passed the PI Round and got selected for MTV Roadies.

By profession, Vipin Sahu is a businessman. He has a business of making tiles. Besides, he is a YouTuber also. His paragliding experience video was viral on social media. After that, he came into limelight.

Soon, he will be on MTV as a contestant in MTV Roadies. He has been selected for the PI Round and got selected.

Many news channels interviewed Vipin Sahu after his viral video. Colors TV invited him to their Mumbai Office. They called him as a guest for their comedy show Khatra Khatra Khatra.

Now, Colors Channel has selected Vipin Sahu as a contestant for their new show Mujhse Shaadi Karoge. In this show, he will propose Shehnaaz Gill. But failed to impress her. She will not select him as a contestant to stay in the house.

Vipin Sahu – The Paragliding Man is a businessman and Youtuber

Vipin Sahu Belongs to UP. In Banda of Uttar Pradesh, he has his Tiles Business. He is also a YouTuber. He has made his youtube channel 5 to 6 months ago. Mostly, Vipin Sahu makes youtube videos on fraud calls. Besides, he also uploads his Vlogs. This paragliding video was also made with the purpose of uploading on his youtube channel. We have mentioned the link to visit his Youtube Channel named as Vipin Pawan Sahu. As of now, he has 35000+ Subscribers.

On his Youtube Channel, he has also uploaded the video of his talks with Shivangi Bhayana and the great Comedian Raju Srivastava. We have activated the links of both the videos in this page. Just scroll down to watch the video. 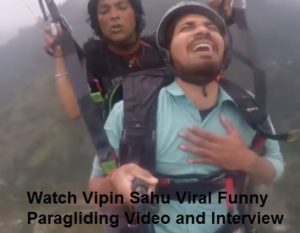 Vipin Sahu who was holidaying with his friends in Kullu. There he went on paragliding ride with his mobile camera to record his experience. He wanted to hide this video from everyone. So, he saved it in his laptop. But, his younger brother uploaded it on social media and the result is in front of us. 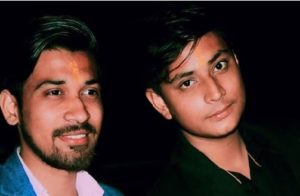 His Paragliding Video went viral on social media. After this Viral Video, he became famous and many news channels have visited his place for having his Interview.

We have shared the Vipin Sahu Paragliding Video and Memes Video made using his commentary on this page. We have also uploaded his latest video of Interviews with leading News Channels of India.

If you are unaware of this matter, then we are here to tell you everything about Vipin Sahu like Who is Vipin Sahu? How his personal video having Paragliding Experience for the first time went viral on social media? Who uploaded his Paragliding Video on youtube and how he became an Internet Sensation?

On 29th September 2019, 13 contestants are locked in this beautiful house. The names of Bigg Boss 13 Contestants are:

The Viral Paragliding Man talks about his experience and he also shares the response he got back from the audience in an interview with India Today. Here is the highlights of what he said in an Interview: 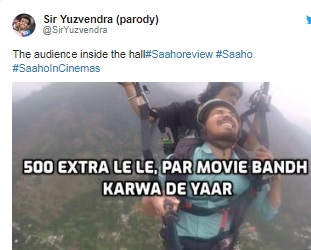 Friends, we have informed you everything about Vipin Sahi – the Viral Paragliding Man sharing his Funny Ride Experience. We thank him for laughing millions of people.

If you have any other information about Vipin Sahu, please tell us. We will update the same in our article. Keep following our site gulabigangofficial.in. Like, Follow, and Share our FB Page Follow your Celebrity. Thank You.

Who is Vipin Sahu?

Vipin Sahu is a youtube and tiles business owner from Uttar Pradesh.

Why is Vipin Sahu known as Paragliding Man?

He is popularly known as Paragliding Man because his funny paragliding video went viral. Due to which he got fame and fans overnight.

What is the age of Vipin Sahu?

What is the hometown of Vipin Sahu?

His hometown in Banda, Uttar Pradesh.

No, he is unmarried and single.