The Paragliding Man Vipin Sahu has qualified the MTV Raodies Revolution Audition. This is the 17th season of Roadies and named as MTV Roadies Revolution.

Famous as The Paragliding man Vipin Sahu is back on Colors Tv once again. For the first time, he appeared as a guest on the comedy show Khatra Khatra Khatra.

Now, he appears on Colors TV as a contestant in the new show Mujhse Shaadi Karoge. He was one of the 6 suiters for Shehnaaz Gill. But, he was not selected by Shehnaz Gill to stay in the house as a suiter for her.

We have earlier informed you about the meeting of Colors TV and Vipin Sahu. After that, there were speculations that he may enter the Bigg Boss 13 house as a contestant. But, this could not happen due to some reasons.

Now, once again, we are informing you that Colors TV has signed a contract with Vipin Sahu for their new show Mujhse Shaadi Karoge. In this show, he will compete with other contestants for marrying Bigg Boss 13 Contestant Shehnaaz Gill.

Today, we are revealing the name of one more person who might enter the Bigg Boss House. The name of that person is Vipin Sahu – The Paragliding Man. He got fame after his viral video on the Internet and overnight, he became the Vipin Sahu – Funny Paragliding Man. He will add more fun and Popularity to Bigg Boss 13. If they can select Dhinchak Pooja, why not Vipin Sahu. He is far better entertainer than Dhinchak Pooja. 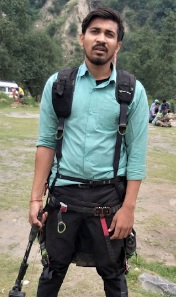 Because of the Viral Paragliding Ride, Vipin Sahu may land directly in the Big Boss House. Yes, you have heard right. Vipin Sahu may enter as a contestant in the reality show Big Boss. We know that this season of Big Boss will select only celebrities as contestants and there is no space for commoners in this season.

On 29th September 2019, 13 contestants are locked in this beautiful house. The names of Bigg Boss 13 Contestants are:

But, Vipin Sahu is not less than Celebrity after his viral video. Many News Channels have taken his interview. Everybody is interested in watching his next video doing Skydiving. His commentary has entertained the audience a lot. 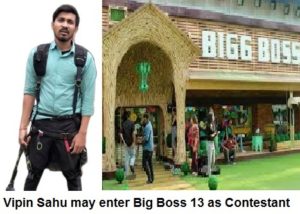 Recently, he visited Mumbai. He was invited by the officials of Colors TV. As per the information gathered from our reliable sources, he was called by Colors TV for a meeting. He has a meeting with Colors TV at the BBC Studio. Here is the proof of that:

Vipin Sahu has posted his pic on his Facebook account showing that he is going to attend a meeting with Colors TV. After that, he got comments like Vipin Sahu coming in Big Boss or Vipin Sahu Big Boss Confirmed Contestant.

He has a huge fan following after his viral video of Paragliding Ride. His dialogues in that video are now became so popular that everybody is using his lines in Memes, Videos, Saaho Reviews, and Daily Routine Language.

His fans want to see him as a contestant in Big Boss House. It will be very beneficial for the Channel Colors TV and for the reality show Bigg Bos if they pic Vipin Sahu in Big Boss.

We will soon update you about the confirmation of Vipin Sahu as Big Boss Contestant. Stay Connected with us @gulabigangofficial.in. Like our Facebook Page – Follow Your Celebrity.

If you want to see Vipin Sahu – The Paragliding Man as Bigg Boss Contestant, then type “Yes” in the Comment Section. Thank You.

No, he is rejected by Shehnaz Gill.

Has Vipin Sahu auditioned for Roadies?

Yes, Vipin Sahuhas qualified the audition for MTV Roadies Revolution. This is the 17th Season of MTV Roadies.

Why is Vipin Sahu Popular?

He became popular overnight when his Paragliding video went viral on social media.

On which TV Show, Vipin Sahu appeared for the first time?

Vipin Sahu appeared as a guest on Khatra Khatra Khatra show on Colors TV for the first time after gaining popularity as Paragliding man.