An onlooker made a video of a street boy Shivam, playing Guitar like a pro and singing the song Teri Mitti from Kesari Movie. A few YouTubers uploaded the video on their youtube channel and the video went viral.

The Team of RED FM found the talented boy and gave him a chance to perform on the live stage in RED FM Swag Fest 3.0 Panjabi Tadka. He performed with the Panjabi singer B Praak on stage. 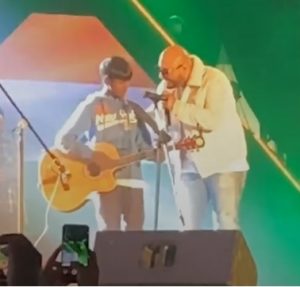 Talent is something individuals are brought into the world with. No measure of preparing can cause a person to exceed expectations in something he isn’t naturally skilled with. They would have the option to assimilate the expertise, clean it with steady practice, however, that magic will miss.

There are other people who are brought into the world with a blessing, and if this ability is recognized and supported the manner in which it ought to be, they will proceed to become experts in the field.

A boy, named Shivam, has stunned onlookers in Delhi’s Connaught Place by playing Guitar like a pro and singing the song Teri Mitti. On 26th August 2019, a YouTuber uploaded his video performing the song Teri Mitti with Guitar on his youtube channel Hyphen Music. The street boy got noticed by many people. A few youtube channels also uploaded the same video of Shivam on their channels.

Shivam, a Talented Street Singer playing Guitar like Professionals, got a chance to perform on the live stage

Shivam, a 12 years old boy noticed for his singing talent. He has not got training in playing Guitar, yet he plays Guitar like a professional. After watching his video on youtube channel on 26th August 2019, people got impressed by his talent for playing Guitar and singing song Teri Mitti.

The street boy Shivam used to sell Balloons in Delhi CP to earn his living. Later, he learned to play Guitar by observing others playing Guitar. He has no professional training in playing Guitar or singing.

After that, the team of RED FM found the talented boy and give the chance of performing on the live stage.

On 9th November 2019, RED FM organized the Live Stage Show – RED FM Swag Fest 3.0 Punjabi Tadka. In this stage show, Punjabi Singers Millind Gaba, Babal Rai, B Praak, Jassi Gill, Parmish Verma, Neha Bhasin, and the Urban Dance Troupe performed. In the same stage show, they introduced a 12-year-old talented boy Shivam. They told the Audience that this boy is not trained in playing Guitar, yet he plays Guitar like a pro. Punjabi Singer B Praak also performed with Shivam. B Praak thanked the team of RED FM for finding this talented boy.

Punjabi Singer B Praak and others are also helping Shivam in making his career in the Music Industry. We wish Shivam Good Luck for the future. We also thank the team of RED FM for bringing the talent of a 12-year-old street boy of Delhi in limelight.