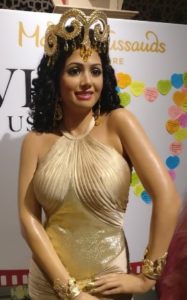 Madame Tussauds Singapore had announced to honor the legendary actress Sridevi by placing her Wax Statue in their museum on her Birth anniversary on 13th August 2019. Fulfilling their promise, they made the Wax Statue of Sridevi in her unforgettable Character of Hawa Hawai Song from Mr. India.

They invited Boney Kapoor and His Daughters to unveil the Wax Statue of the Legendary Actress Sridevi. As a tribute to Sridevi, the historical museum had additionally gathered tribute messages from her fans from over the world and showed them on the tribute wall at the launch ceremony. 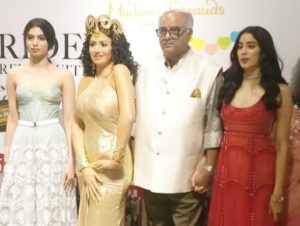 It was a very emotional moment for Boney Kapoor and His Family. At the Unveiling Ceremony, Boney Kapoor along with his daughters Jhanvi Kapoor and Khushi Kapoor present. Sanjay Kapoor (Brother of Boney Kapoor) and two close friends of Sridevi – Rakhee and Raam Punjabi had also attended the unveiling ceremony.

Boney Kapoor had tremendous love for his wife Sridevi. He breaks down at the Sridevi’s Unveiling Ceremony while speaking a few words before unveiling the statue. Jhanvi Kapoor holds the hand of his father to support and console him. 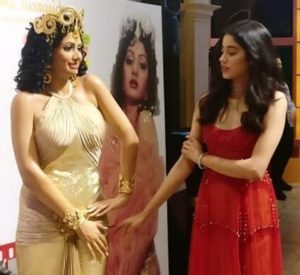 Jhanvi was also looking sad and tried a lot to hold her tears. A serious-looking Janhvi was seen looking at the texture of the dress that the statue is wearing and checking the nails of Sridevi’s Wax Statue.

Khushi Kapoor, Boney Kapoor, and Jhanvi Kapoor posed together with the Wax Statue of Sridevi. We just cannot imagine how emotional moment it will be for all three of them. This picture speaks a lot about emotion. An excellent entertainer, and a star, Sridevi Ji will always live in the hearts of her fans.

You can also give tribute messages for Sridevi by using the comment box given below. We will provide the latest Bollywood news and all kinds of Entertaining News from Time to Time. Just like and Follow our site gulabigangofficial.in and our facebook page Follow Your Celebrity.

Where is the wax statue of Sridevi?

Who unveiled the Sridevi Wax Statue in Madame Tussauds Museum in Singapore?

What is the death date of Sridevi?

How did Sridevi die?

The great actress Sridevi died on 24th Feb 2018 in Dubai. As per the forensic report, the reason for the death of Sridevi was Accidental Drowning in the Bath Tub. Her blood reports say that she was heavily drunk. Due to heavy drinking, she lost her control and fell into the bathtub accidentally.

Who are the daughters of Sridevi?

What is the date of birth of Sridevi?

What was the age of Sridevi at the time of death?

Sridevi was 54 years old at the time of death.