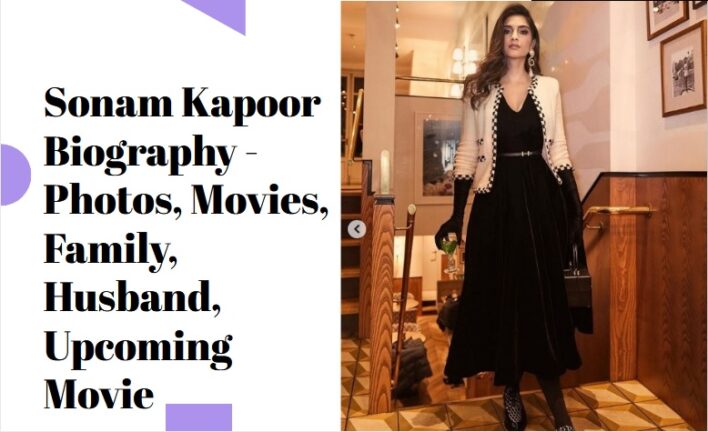 About Sonam Kapoor: Sonam Kapoor is an Indian Actor and Model primarily work in Bollywood. These days, She is busy in the promotion of her upcoming movie The Zoya Factor with Malayalam based Actor Dulquer Salmaan.

Sonam Kapoor is the first daughter of famous actor Anil Kapoor and married to the businessman Anand Ahuja. After marriage, she is named as Sonam Kapoor Ahuja.

Sonam Kapoor has made her Bollywood debut with the movie Sawariya in the year 2007. Now, after a decade in Hindi Film Industry, she has established her name in Bollywood on her own.

Now, she is not just known as the Daughter of Anil Kapoor. Rather She is known as the most popular and Fashionable Celebrity, A super Model, a National Film Award winner, and Filmfare Award Winner – The Sonam Kapoor. She has achieved this name and fame with her hard work, talent, and acting skills.

Here is the list of Sonam Kapoor Favorite Things and Hobbies:

Sonam Kapoor was born on 9th June 1985. She was the first child of Anil Kapoor and Sunita Kapoor. Her younger siblings are Rhea Kapoor and brother Harshvardhan Kapoor (Actor made debut with Mirzya). Her father is Punjabi while her mother belongs to a Sindhi Family.

Married Life of Sonam Kapoor: She is married to Anand Ahuja – The Businessman. After a long time relationship, they tied into a knot on 8th May 2018. Their marriage was a big Bollywood buzz of the year 2018.

She started her career with Sanjay Leela Bhansali’s Sawariya with the actor Ranbir Kapoor. It was Debut movie for both of them. This movie could not do well at the box office. But, the acting skills of Ranbir and Sonam Kapoor got the appreciation that helped in getting more movies offers.

During her journey, she had acted in the following hit movies:

These days, Sonam Kapoor is excited for her next movie i.e. The Zoya Factor. She is in the lead role-playing the character of a Lucky Charm for Indian Cricket Team. The hero of The Zoya Factor is Dulquer Salmaan – A Malayalam Super Star. This movie is releasing on 20th September 2019. The direct competition of this movie is with Karan Deol and Saheer Bamba staring Pal Pal Dil Ke Paas.

Who is Sonam Kapoor Ahuja?

Sonam Kapoor Ahuja is an Indian Actor and Model primarily work in Bollywood.

What is the age of Sonam Kapoor?

Who is the father of Sonam Kapoor?

Who is the brother of Sonam Kapoor?

Harshvardhan Kapoor. He will soon appear in a movie which is a biopic of Abhinav Bindra.

Yes, Sonam Kapoor is married to Anand Ahuja on 8th May 2018.

Who is the husband of Sonam Kapoor?

Businessman Anand Ahuja is the husband of Sonam Kapoor.

What is the net worth of Sonam Kapoor?

The estimated net worth of Sonam Kapoor is $ 13 Million.