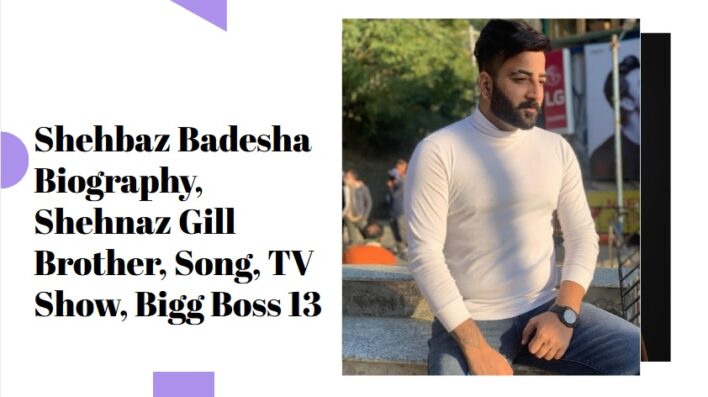 Shehbaz Badesha is an Indian Model and Businessman. He has become a television personality and social media star after his Bigg boss 13 House visit in Family week as a connection of Shehnaz Gill.

Shehbaz Badesha has become a singer now. He has sung a song named Dil Tod Gayi which was released on 29th December 2020 on Gaana Gang Youtube Channel. The direct link to this song is provided at the end of this page.

He was also a part of the Colors New Show Mujhse Shaadi Karoge. This is an entertainment show to find a perfect match for her sister Shehnaz Gill and BB13 Contestant Paras Chhabra.

Watch the new song Bhula Dunga featuring Shehnaz Kaur Gill and Siddhartha Shukla. This song is sung by Darshan Raval. To Watch the video of Bhula Dunga Song, just scroll down till the end of this page.

We have also activated links to Shehbaz Badesha Instagram, Facebook, Twitter accounts, and Wikipedia Page. So that you can easily follow him. Just continue reading and scroll down till the end of this page.

Shehbaz Badesha gains popularity in social media because of the fame of Shehnaz Gill on Bigg Boss 13. Media Persons and YouTubers started taking interviews with Shehnaz Gill’s Father, Brother, and other family members.

In the family week of BB13, Shehbaz got the chance to spend one week in the Bigg Boss 13 House. Both Shehbaz and Shehnaz Gill entertained the audience. On the weekend ka war, he made Salman laugh and laugh by cracking jokes.

Shehbaz Badesha was born on 7th July 1991 in Beas, Amritsar, Punjab, India. His father Santokh Singh Gill is a politician in Punjab. His mother Parminder Kaur is a housewife.

He has a sister Shehnaz Gill, Bigg boss 13 Contestant. Now, she is in Mujhse Shaadi Karoge Show on Colors TV.

Shehbaz dedicated a song to Shehnaz Gill on her birthday

He did his schooling from Delhi Public School, Amritsar.

Currently, he is in his family business. Additionally, he handles and manages the projects of Shehnaz Gill. He stays with Shehnaz Gill everywhere she goes for shooting.

Shehbaz was staying in Mujhse Shaadi Karoge sets along with other contestants. He is here to guide Shehnaz Gill for selecting the best partner for herself. Shehbaz is enjoying flirt with all-female contestants, especially Ankita Srivastava and Heena Panchal. The audience is liking his jolly nature. Salman Khan has also said about Shehbaz that we have got our Bigg Boss Season 14 Contestant.

He has sung a song Dil Tod Gayi featuring himself in the video of this song. This song got a good response from the audience.

Mujhse Shaadi Karoge Colors Show is a new show on colors. The purpose of this show is to entertain people and to find a perfect match for Paras Chhabra and Shehnaaz Gill.

As per the concept of Mujhse Shaadi Karoge, 5 male suitors and 5 female suitors will be locked in a house just like Bigg Boss. Shehnaaz Gill, Paras Chhabra, and Shehbaaz will also live in the same house with cameras. There will be nominations and evictions every week. The show will continue for 3 months.

Shehbaz Badesha is also a part of this new show Mujhse Shaadi Karoge. He is Shehnaaz Gills Brother. So, he will help her in selecting the right partner for her. He will judge contestants on the basis of their performances in different tasks.

From time to time, we will keep this page updated with the latest news about Shehbaz Badesha. Just stay connected with us.

Stay connected with us FNST i.e. feelNoShame.Today. We provide trending news and the biography of other celebrities, politicians, sportspersons, other famous personalities. Mention the name of your favorite celebrity in the comment section given below. Like and follow our Facebook Page – Follow Your Celebrity. Thank You.

What is the age of Shehbaz Badesha?

Who is the sister of Shehbaz Badesha?

Who is the father of Shehbaz Badesha?

Santokh Singh Gill. He is a politician from Punjab.

Why is Shehbaz Badesha popular?

He entered the Bigg Boss 13 House for supporting Shehnaz Gill in Family week. He entertained everyone and even Salman Khan. He also appeared in Colors Show Mujhse Shadi Karoge.

Shehbaz Badesha and Paras Chhabra were staying in the same house in Colors Show Mujhse Shadi Karoge. Both were indulged into fights in Bigg Boss 13 House and also in Mujhse Shaadi Karoge Show.