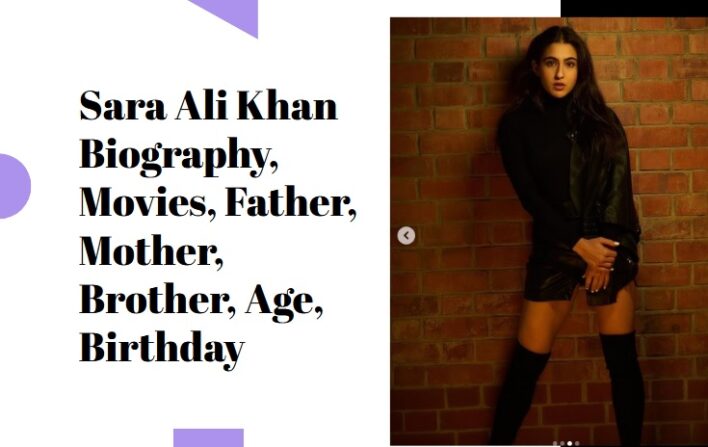 She has made her debut in Bollywood in the year 2018 with movies Kedarnath and Simba. Both movies were successful at the box office and her acting skills and beauty is admired by the audience and critics as well.

Here you can get the complete information about this rising actress Sara Ali Khan. You can read about this new star kid Sara Ali Khan Biography, Movies, Lifestyle, Affairs, Upcoming movies.

Sara Ali Khan is a fresh face in the Indian Film Industry. With only two films released in the year 2018, she has become very popular in Bollywood and on the Internet.

She is a fitness freak and before entering into Bollywood, she lost approx 40 kg weight and became Fat to Fit. Her workout videos are mostly going viral on social media. Have a look at Sara Ali Khan Bio and basic details:

Sara Ali is born into a celebrity family. Her Grandfather Mr. Mansoor Ali Khan Pataudi was an Indian Cricketer and Her Grandmother was Sharmila Tagore, the famous actress. Saif Ali Khan is the father of Sara Ali Khan. She is the first child of Saif Ali Khan and Amrita Singh.

She has a younger brother named Ibrahim Ali Khan(born in the year 2001). Her parents got divorced in 2004 aftre13 years of marriage. At that time, she was just 9 years old.

Talking about the personal life of Sara Ali Khan, she had an affair with Veer Pahariya, who is the Maternal Grandson of Sushil Shinde (Former Union Minister). There were rumors in Bolly Town that they got engaged also. But, Sara had clarified that they are still good friends and have no marriage plans. She also revealed that she used to have a crush on Kartik Aryan and Ranbir Kapoor. She is doing a movie with Kartik Aryan that expected to be released on Valentines Day in the year 2020. Both are dating each other and she has also visited the sets of Pati Patni Aur Woh to meet Kartik Aryan.This pic is from shooting in Himachal Pradesh for that movie.

The acting career of Sara Ali Khan has started with good notes. Her first movie was Kedarnath in the year 2018 and in the same year, her second movie released i.e. Simbaa directed by Rohit Shetty. Both of the movies performed well at the box office. her acting was appreciated by everyone. She has also got Filmfare Award for the Best Female Debut for the movie Kedarnath.

Sara Ali Khan’s Fans are looking forward to her next movies. Right now, she is working on two major projects. She has signed David Dhawan’s Movie Coolie No. 1 (remake of 1995 movie) alongside David Dhawan.

Besides that, Sara Ali Khan will also work in the movie of Imtiaz Ali – Aaj Kal Romantic Drama (Expected to release on 14th Feb 2020) In this movie, she is paired with Kartik Aryan.

Soon, Sara Ali Khan and Kartik Aryan will enter the Bigg Boss House and attend the weekend ka war for the promotion of their movie Love Aaj Kal.

From time to time, we will update this page. Just stay in touch with us.

Who is Sara Ali Khan?

Sara Ali Khan is an Indian Actress who made her debut in Bollywood in 2018 with the movie Kedarnath and Simba.

What is the age of Sara Ali Khan?

Who is the father of Sara Ali Khan?

Who is the mother of Sara Ali Khan?

Amrita Singh is the mother of Sara Ali Khan. Actress Kareena Kapoor Khan is her step-mother.

Who is the boyfriend of Sara Ali Khan?

Sara Ali Khan has not officially announced the name of her boyfriend. But, Actor Kartik Aryan is very close to her.

What is the net worth of Sara Ali Khan?

The estimated net worth of Sara Ali Khan is $ 2 Million.

How many followers have Sara Ali Khan on Instagram?