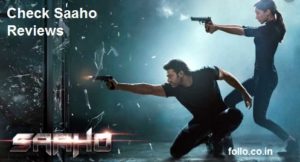 We are here to provide you the Saaho Movie Review. This movie is getting mixed reviews. Despite having bad reviews on Twitter, Kamal R Khan, and Film Critics, the movie is doing well at the Box Office Collection. In just two days, Saaho has collected Rs. 220 Crores at Box Office.

We have compiled the Saaho Reviews given by India Today, Times of India, Hindustan Times, IMDB, and My Personal Review on Saaho after watching the movie on Saturday.

One the one hand, Most Film Critics have given Sahoo 1.5 or 2.5 Star Ratings. They find it confusing, Songs are forcefully added, storytelling is not good as per their views. On the other hand, we have mixed reactions from the audience. Some are liking twists and turns in the story while others are saying it confusing to have too many twists and turns and characters.

Click the link to read Users Saaho Review at IMDB

I was very excited to watch the movie after watching the trailer and decided to watch it on the first day and first show. I have also read the Saaho Review from Dubai Censor Board that added more excitement about Saaho. But could not make it on first day due to some reasons.

Then I read negative reviews on Twitters and especially the review of Kamal R Khan. I also see Memes on Saaho online. After which my level of excitement got down a bit. But I made my mind to watch Saaho on Saturday and check out the things on my own. So, here is my personal Review on Saaho:

I also don’t find that it was weak storytelling. The story was told beautifully with suspense and thrill at every step. I just felt the story was a bit fast at the starting. Things are changing too fast. It seems hard to connect with all these. The story of gangster and Krana Village and accident of Jackie Shroff…. all these things were happening too fast to connect with.

Some people are confused and had a headache after watching the movie Saaho. Well, you have to be intelligent enough to understand an Action Thriller movie.

Talking about the story of Saaho, it is a mix of two movies stories, which I felt. One story is about Gangsters Like any other South Indian Movie where Successor wants to take the revenge of his Father’s Murder. Second Story is like Dhoom 2 or Race 3 Movie based on Smart Theif. Sujeeth has mixed these two stories into one story connected with Black Box. But he connected the things interestingly. The movie has a rewatchable quality.

The different look of Bahubali in casuals is nice. Prabhas is looking good in T-Shirts, Cargos, jeans. Shraddha is adorable in her looks and acting as well. Chunky Pandey is the Best in portraying the evil Character of Devraj. Neil Nitin Mukesh was good by looks only. His character was not much powerful.

Overall, If you love Action Thriller Movies, You must watch Saaho. In one Its a mix of Tollywood, Bollywood, and Hollywood.As fast as Tollywood Movies, As romantic as Bollywood Movies and Actions and Screenplay matches the level of Hollywood. I will give it 8 stars out of 10. 1 star cut for songs and another star cut for a bit fastly moving story.