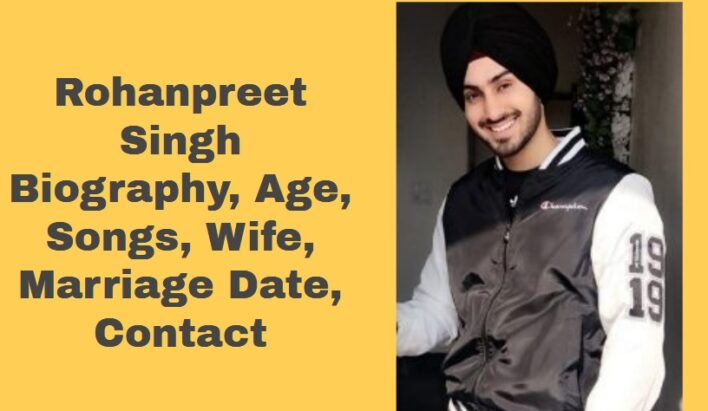 Now, he is coming as a contestant in Mujhse Shaadi Karoge Colors Show. Roanpreet is a very good friend of Shehnaaz Gill. In this show, he will try to impress Shehnaaz Gill for marriage.

After that, Rohanpreet got married to singer Neha Kakkar on 24th October 2020 during lockdown.

We have also activated links to Rohanpreet Singh Instagram, Facebook, Twitter accounts, and Wikipedia Page. So that you can easily follow him. Just continue reading and scroll down till the end of this page.

Now, Rohanpreet is a contestant on Colors New Reality show Mujhse Shaadi Karoge. He knows Shehnaaz Gill for two-three years and she has learned singing from him.

Singer Rohanpreet Singh was born on 1st December 1994. His age is 25 years as in 2019. He is born in Patiala, Punjab. His father Mr. Gurinder Pal Singh is a sportsman in Punjab State Electricity Board and his mother Daljeet Kaur is a housewife. He has two sisters Rashminder Kaur and Amanpreet Kaur.

He started singing at the age of 3 and a half years. Rohanpreet wanted to make his career in singing. So, he participated in Sa Re Ga Ma Pa Lil Champ in 2007-08. He was the first runner up there.

After that, he got chances to perform in many live shows and concerts in India and abroad as well. He is very fond of making tiktok videos. Rohanpreet Singh Tik Tok Id is rohanpreetsingh26.

The first song of Rohanpreet was launched in 2017 i.e. Bang Gang. His popular songs are:

Singer Rohanpreet married to singer Neha Kakkar on 24th October 2020 during lockdown. Rohan fell in love with Neha during the shot of a song. Both went to Dubai for their Honeymoon. Their wedding and honeymoon pics were talk of the town at that time.

After marriage, they released a song – Khyaal Rkhya Kar.

Besides being a singer, Rohanpreet Singh is a television personality also. He made his TV Debut on a singing reality show on Zee TV. Rohanpreet was the first runnerup on Sa Re Ga Ma Pa Lil Champ in 2007-08.

After 10 years, he appeared as an adult singer on television in Colors Singing Reality show The Rising Star.

Now, Rohanpreet is participating in a reality show on colors tv. But, this time, not for singing, but for marriage. He will impress his friend and Bigg boss 13 Contestant Shehnaaz Gill for marriage in Mujhse Shaadi Karoge Show. This show is made to find a perfect match for Shehnaaz Gill and Paras Chhabra.

As per the concept of Mujhse Shaadi Karoge, 5 male suiters and 5 female suiters will be locked in a house just like Bigg Boss. Shehnaaz Gill, Paras Chhabra, and Shehbaz Badesha will also live in the same house in cameras. There will be nominations and evictions every week. The show will continue for 3 months.

From time to time, we will keep this page updated with the latest news about Rohanpreet Singh. Just stay connected with us.

Stay connected with us FNST i.e. feelNoShame.Today. We provide trending news and the biography of other celebrities, politicians, sportspersons, other famous personalities. Mention the name of your favorite celebrity in the comment section given below. Like and follow our Facebook Page. Thank You.

Who is Rohanpreet Singh?

He is a Punjabi Singer and participated in singing reality shows Sa Re Ga Ma Pa Lil Champ and The Rising Star.

What is the age of Rohanpreet Singh?

What is the hometown of Rohanpreet Singh?

He belongs to Patiala, Punjab.

Who is the girlfriend of Rohanpreet Singh?

Yes, they are good friends. They know each other before entering the show Mujhse Shaadi Karoge.

What is the net worth of Rohanpreet Singh?

His estimated net worth is between $ 1 Million to $ 5 Million.