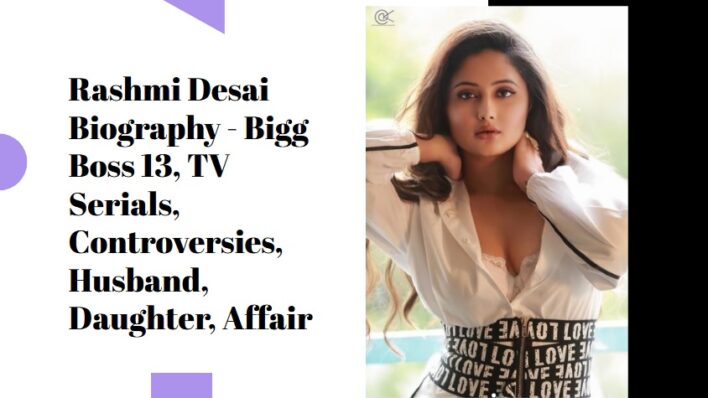 Rashmi Desai is a popular Indian TV actress. She got fame from her Negative Character Tapasya from TV Serial Uttaran. These days, she is in the limelight because she has entered the Big Boss 13 House as a Contestant. She is in the top 5 contestants of BB13 and very high chances of winning this show.

Latest Updates Bigg Boss 13: The biggest TV Reality Show Bigg Boss Season 13 is extended for 5 weeks. So, 3 new wild card entries are made i.e. Shefali Bagga, Arhaan Khan, and Madhurima Tuli. It may possible that Salman Khan will leave the show as a host because of the extension. Who will be the new host of Bigg Boss 13? is a big question. We will keep you updated about this. Just stay connected with gulabigangofficial.in and like our facebook page. Thankyou.

Read Rashmi Desai full biography through this page. Contact Details or Rashmi Desai and links to her social media accounts are given in the last section of this page. Scroll down and continue reading to know everything about Rashmi Desai.

One of the highest-paid Indian Television actress Rashmi Desai was born on 13th Feb 1986in Nagaon, Assam. In 2019, her age is 33 years. She belongs to a Gujarati Family and currently, living in Mumbai.

Bigg Boss 13 Contestant Rashmi Desai is a very talented actress. With her hard work, she achieved name and fame in the Indian TV Industry. Before starting acting in TV Industry, she started her acting career with low-budget movies in the year 2002. She has acted in Bhojpuri Movies from 2004 to 2010.

She made her debut on TV with the TV Serial Ravan(2006-2008) on Zee TV. But she got recognization and Awards from her show Uttaran on Colors TV for the role of Tapasya Rathore.

These days, Rashmi Desai is in Bigg Boss 13 House as a contestant. In the house, she had the biggest fight with co-contestant Siddhartha Shukla. During the fight, Rashmi called Siddhartha as Nashedi, Gattar, and so many other abusive words. She was constantly asking Siddhartha what is his meant by Aisi Ladki….Aisi Ladki mtlb Kaisi Ladki. You are pointing on my character. On weekend ka vaar, Salmaan Khan tried to clarify what was Siddhartha meant by saying Aisi Ladki. It was not about her character. But, she still went on with her own perception. At this, Salmaan Khan rebuked Rashmi and made her understand that she is spoiling her reputation on her own.

Now, after this statement by Siddhartha Shukla, everybody is interested in knowing the real name of Rashmi Desai.

Well, we want to tell you that earlier her alleged boyfriend has also said that the real name of Rashmi Desai is Shivani Desai and the real name of Arhaan Khan is Mazhar Shaikh. But, Rashmi has also used her name as Divya Desai while working in Bhojpuri Movies at the starting of her career.

While working with Nandish Sandhu in Uttaran Tv Serial, both fell in love with each other. They got married on 12th Feb 2012 in Dholpur, Rajasthan. In 2013, both are blessed with a daughter Manya Sandhu. In 2015, Rashi Desai and Nandish Sandhu performed as Contestants in Dance Reality Show Nach Baliye 7. Their marriage could not do well and both filed for divorce in 2015. Both are now divorced. Rashmi Desai is taking care of Manya Sandhu as a single parent.

After Divorce with Nandish Sandhu, Rashmi Desai Rashmi Desai is focusing on her acting career. She is also dating actor Arhaan Khan since 2017 when she met him in the wedding of Yuvika Chaudhary and Prince Narula. Both are planning to get married soon.

Rumours said: Arhaan Khan will also enter the Big Boss 13 House after a few weeks. Moreover, both will get married in the Bigg Boss House. But these are only rumours as per our souces of information.

Most people know that she has been divorced with her husband Nandish Sandhu. But, only a few are aware of the fact that both are also blessed with a girl child right in the year 2013. After divorce, Rashmi Desai got the custody of her daughter. The name of Rashmi Desai’s Daughter is Manya Sandhu. Rashmi lives with her mother, brother, and daughter in Mumbai.

Rashmi Desai has also appeared in the Bigg Boss 8, 6,10 for Guest Performance. She has also done a Cameo Appearance for the Salmaan Khan Song – Dagabaaz Re….in Dabang 2.

Nandish Sandhu blamed Rashmi Desai for her divorce. He said that the reason behind their divorce was the over-possessive nature of Rashmi Desai. But, she clarified in media that Nandish is doing this knowingly to spoil her image in the TV Industry. She clarified that she was so busy with her acting career that she could not get time for being over-possessive. Moreover, there is two-person involvement required for the success or failure of a relationship.

Second controversy is associated with the Marriage Rumours of Rashmi Desai with her alleged boyfriend Arhaan Khan. Here is what she said about these rumors ina n interview:

The third controversy was connected with her skin disease. She informed to the media that she is suffering from Psoriasis – a skin disease. Due to this disease, she had to take lots of medicine and she has gained a lot of weight. She got trolled for her over-weight. Later, she clarified the reason behind her excessive weight is her disease and she will be back in shape soon.

It will be interesting to see this Jodi in Bigg Boss 13 House. Interestingly, Both are now Bed Friends Forever in Bigg Boss House. Which means, they will share the same bed for the whole season. For the first week, both are given Kitchen Duties.

Final Words: We will keep you updated about the Bigg Boss 13 Contestant Rashmi Desai at regular intervals of time. Just stay connected with us and like our facebook page.

What is the age of Rashmi Desai?

What is the birthplace of Rashmi Desai?

Yes, Rashmi Desai was married to actor Nandish Sandhu in 2012 and they divorced in 2015.

Who was the husband of Rashmi Desai?

Tv Actor Nandish Sandhu was the husband of Rashmi Desai.

Who is the boyfriend of Rashmi Desai?

In Bigg Boss 13, Rashmi Desai has declared that she is single in the press conference. She was in a relationship with Arhaan Khan. They proposed each other on the show and later broke up as Rashmi got to know about his marriage and child in the show.

Are Rashmi Desai and Arhaan Khan in a relationship?

Which is the new TV Serial of Rashmi Desai?

Is Rashmi Desai has a daughter?

Yes, Rashmi Desai is blessed with a daughter in 2013.

What is the name of Rashmi Desai Daughter?

The name of Rashmi Desai Daughter is Manya Sandhu.

What is the relationship of Rashmi Desai with Siddhartha Shukla?

There were rumors that Rashmi Desai and Siddhartha Shukla are dating each other while working in TV Serial Dil Se Dil Tak. But, in Bigg Boss, we witness their love-hate relationship. But, they have clarified that they are not in a relationship. In fact, they are not even good friends.