Koena Mitra is a model, actress, and dancer. In Bollywood, she is known for her dancing numbers or Item Songs like Saki Saki from Musafir and for her character and dancing song Dekha Jo Tujhe Yaar Dil Me Baji Guitar from Apna Sapna Money Money.

She made a wrong decision of opting for Nose Surgery, which went wrong. Because of this wrong plastic surgery, Koena Mitra lost her face and her career in Bollywood.

We have also activated links to Koena Mitra Instagram, Facebook, Twitter accounts, and Wikipedia Page. So that you can easily follow her. Just continue reading and scroll down till the end of this page. 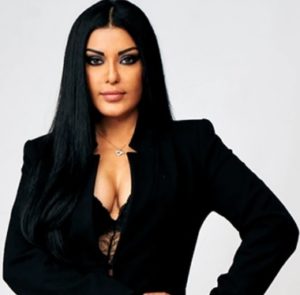 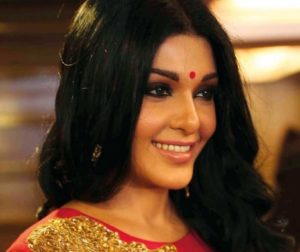 Koena Mitra was born on 7th January 1984 in Kolkata, West Bengal. Her father is a CA and her mother is a school teacher. But, she wanted to be in the Glamour world since her childhood. She convinced her parents to let her do what she wanted. Koena is an Animal Lover. 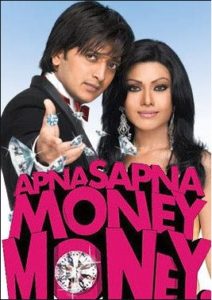 At Present, she lives in Kolkata, West Bengal with her Father, Mother, and Younger Sister. Koena used to spend time with her family, especially, during Durga Pooja and Diwali in Kolkata.

Koena Mitra was named after her mother name Krishna. Koyna River is a tributary of the Krishna River. So, The name of Koena is a symbol of the bond between mother and daughter.

Talking about her affairs, She said in an interview that she had been in a relationship with 4 men and failed every time. Now, she is single. She said that Men just want women they can rescue and I cannot be that kind of woman.

Koena Mitra Career as a Supermodel: She started her career as a model. At a point, she was the supermodel in India. But her wrong plastic surgery ruined her career and her face as well.

When she was at the peak of her career, Koena Mitra appeared in many ads like ACP Whisky, Mirinda, Clinic All Clear, Maruti Alto. As a model, she walked the Ramp for many Fashion Weeks in Milan and Beijing. 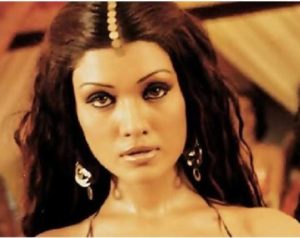 Currently, Koena Mitra is in Bigg Boss House Season 13. After Bigg Boss, She will be a producer. She is interested in producing Movies and web series in India.

In 2010, Koena Mitra went through a Nose Surgery, which went wrong. Due to which, her face and her career suffered a lot. She lost her projects. Her close friends also left her. Her bones started swelling after Surgery. Doctors gave up and said only prayers could do anything. She did not come out of her house for 6 months. 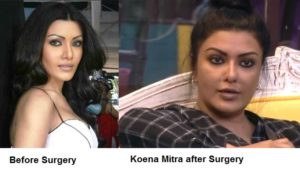 Then, she decided to go out with the face she has. She accepted the truth and decide to face the world with it. Due to this Surgery Disaster, she could not get work in Showbiz.

In 2011, she went to Los Angeles for learning and improving her acting skills. She joined a course at Lee Strasberg Institue. There, she bagged two films – The Story of Naomi and Dark Romance.

Koena Mitra was featured in the Original Saki Saki Song in Musafir Film. The song is recreated in Batala House casting Noora Fatehi for this Item Number. On twitter, Koena Mitra commented on the New Saki Saki Song. She called it a Mess. Here is what she actually said in her tweet: In response to this, Noora Fatehi – the New Saki Saki Girl said that It was not criticism. It was just her personal opinion.

In July 2019, Koena Mitra was sentenced to 6 months Jail for a check bounce case of Rs. 3 Lakhs. The whole incidence connected to another Model Poonam Sethi. Poonam Sethi claimed that she lent Koena Mitra Rs. 22 Lakhs in 2003, which she had not returned. Later, Koena gave a check of Rs. 3 Lakhs to Poonam, which bounced at the bank. Then Poonam sent a legal notice to Koena. Now, the Metropolitan Court has held Koena Guilty. She is sentenced to 6 months jail including payment of Rs. 4.64 Lakhs(including 1.64 Lakhs as interest) to Poonam.

In response, Koena Mitra said that the court gave its verdict in the absence of her advocate. They challenged the decision in Higher Courts. The whole case is a Fraud. Poonam Sethi is making false allegations on her.

In August 2017, a man troubled Koena by making abusive calls from an unknown number. She filed a complaint against that person under section 509 of IPC.

In 2009, there were rumors about KOena Mitra that she took money for appearing in the rally of Jharkhand’s CM. But, later, the CBI officials denied such rumors.

Koena Mitra has entered the Bigg Boss 13 Reality Show on 29th September 2019. In the first week, she is doing well in the show. She comes out with her strong opinion and has shown her leadership qualities. But a few people are trolling her for her looks and voice. 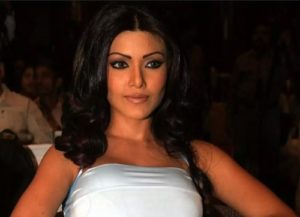 In the first week, the voting lines were closed. But, for the second week, she is being nominated by Abu Malik and Asim Riaz. If you want to save her for the 3rd week, then support her by giving her votes.

Stay connected with us i.e. gulabigangofficial.in for the latest updates related to Bigg Boss 13. We also provide the biography of other celebrities and sportspersons. Mention the name of your favorite celebrity in the comment section given below. Like and follow our Facebook Page. Thank You.

How old is Koena Mitra?

No, she is not married.

What happened to Koena Mitra after Plastic Surgery?

Her nose surgery went wrong and it was a big disaster for her face and health.