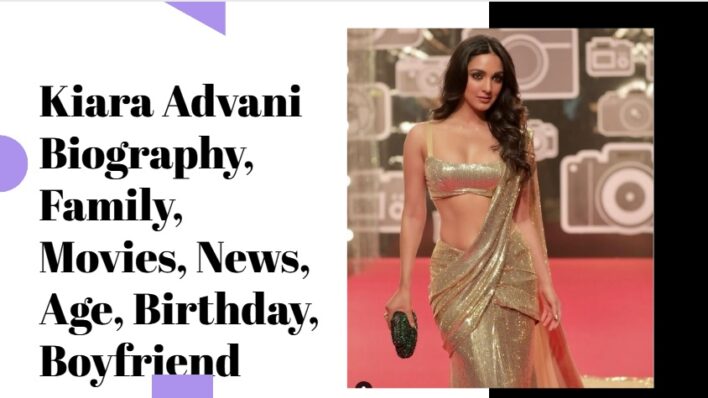 Kiara Advani is an famous Bollywood actress who is famous for the role of Sakshi Rawat in the popular film M.S Dhoni The Untold Story. She acted in many Hit bollywood movies and some Telugu Movie. Kiara belongs to the Sindhi Community. She was always passionate about acting since her childhood. Advani has also developed a good dressing sence even at a very tender age.

In an interview, Kiara said that she had a huge crush on the hollywood actor Leonardo DiCaprie. In 2014, Kiara was voted one of the most desirable women of the year. She is a passionate biker.

We have also activated links to Kiara Advani Instagram, Facebook, Twitter accounts, and Wikipedia Page. So that you can easily follow her. Just continue reading and scroll down till the end of this page.

Actress Kiara Advani was born in 31st July 1992, Mumbai, India. Her age as in 2020 is 27 years. Kiara’s father Jagdeep Advani is an Businessman and mother Genevieve Jaffrey is an Teacher. She has a younger brother Mishaal Advani.

Kiara belongs to a Sindhi Family. She is Sindhi from her father’s side and Scottish, Irish, Portuguese, and Spanish from her mother’s side.

Actor Ashok Kumar is her Step-great-grandfather and saeed Jaffrey is her great-uncle. The model Shaheen Jaffrey and actress Juhi Chawla are her aunts. Kiara Advani and Isha Ambani are childhood friends. Advani and her Family are very close to Salman Khan.

Education: She attended Cathedral and John Connon School, Mumbai. After that she went to Jai Hind College for Mass Communication, Mumbai. Kiara is Graduated. She was very good in studies during her school days and had scored 92% in the class 12th.

Actress Kiara Advani is not married till 2020. So, we cannot tell you the name of her husband right now. Talking about her relationship status, Kiara is single and she does not have any boyfriend.

When she made her bollywood debut in 2014, she changed her name from Alia to Kiara, because as one Alia (Alia Bhatt) was already there in the industry. Kiara Advani was launched in films from “Fungly” in 2014, Which was produced by Salman Khan.

Actress Kiara Advani acted in music vedio “Urvash” with Shaheed Kapoor. She won Zee Cine Award Telugu in 2019, and Zee Cine Award for Kabir Singh in 2019. She has a pending Award International Indian Film Academy Award for Good News in 2020.

Kiara Advani’s latest Instagram picture has left her fans in awe. In the photo, Kiara is chilling in the pool while soaking the setting sun. The rust colour sky, in the snap, enhances the overall look of the photograph.

The photo in less than 24 hours of being posted has already crossed 1.2 million likes. Recently, Kiara had dropped a photo of lip-smacking chocolate chip cookies that she had baked on her own. The post with over six lakh likes has been captioned as, “made by yours truly”.

Kiara has several films lined up in the coming months. She stars in the comedy film Indoo Ki Jawani. She will also be seen opposite Sidharth Malhotra in Shershaah, which is based on the life of Param Vir Chakra recipient army captain Vikram Batra. Kiara also has Bhool Bhulaiyaa 2, Indoo Ki Jawaani and Laxmmi Bomb in her kitty.

From time to time we will gave you latest news about Kiara Advani, please stay with us.

Who is Kiara Advani?

Kiara Advani is an bollywood Actress.

What is the age of Kiara Advani?

Is, Kiara Advani is married?

What is the net worth of Kiara Advani?

Is estimated net worth of Kiara Advani is $ 1.5 million.