Joseph Vijay is an Indian Film Actor and Playback Singer primarily works in Tamil Film Industry. He is one of the most popular and highest-paid actors in Tamil Cinema. Vijay Chandrashekhar charges approx 20 Crores for a movie. 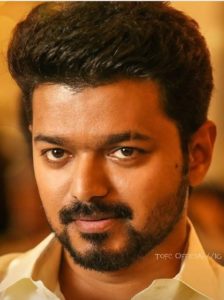 We have also activated links to Joseph Vijay Instagram, Facebook, Twitter accounts, and Wikipedia Page. So that you can easily follow him. Just continue reading and scroll down till the end of this page.

Actor Vijay is a superstar of Tamil Cinema. He is the son of Tamil Films Director S. A. Chandrasekhar and Tamil Playback Singer and Carnatic Vocalist Shoba Chandrashekhar. 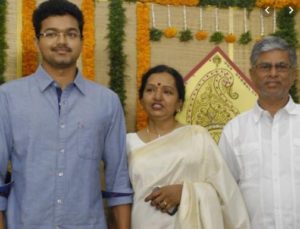 That is why he is interested in acting and singing as well.

Joseph Vijay started his acting career as a child artist in the movie Vetri in 1984. His first movie in a lead role was Naalaiya Theerpu in 1992, directed by his father. As a playback singer, he made his singing debut with the song Bombay City Sukkha Rotti.

Tamil Actor Vijay has acted in more than 60 films in a lead role. He has received lots of awards for his acting in movies like Tamil Nadu State Film Awards, Cosmopolitan Award, IndiaToday Award, SIIMA Award, 8 Vijay Awards, Edison Awards, National Award UK, Edison Awards, and many other awards.

Tamil Actor Joseph Vijay was born on 22nd June 1974 in Madras, Tamil Nadu, India. His full name is Joseph Vijay Chandrashekhar. Popularly, he is known as Vijay. In 2019, Joseph Vijay Age is 45 Years. His father is a Film Director at Tamil Cinema and his mother is a playback singer. Most of his films are directed by his father. 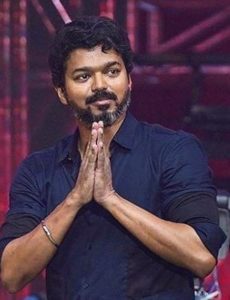 Joseph Vijay had a sister named Vidhya Chandrashekhar who died at the age of Two Years. His sister’s death affaected him a lot. As per his mother, Vijay was very Naughty and Talkative as a Child. But, after Vidhya’s Death, he became silent. The story of Vidhya is depicted in the movie Sukran in 2005. In this movie, actor Vijay played an extended cameo.

Actor Vijay is a Roman Catholic and received his first Holy Communion at a church in Chennai. He attended Loyola College for Graduation, but he dropped out as he was more interested in acting. 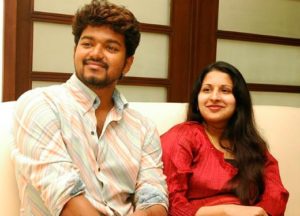 Tamil Superstar Vijay married his fan Sangeetha Sornalingam on 25th August 1999. His wife is a Hindu Sri Lankan Tamil. They met for the first time in the UK and fell in love with each other. Both are blessed with two children – a son Jason Sanjay born in 2000 in London and a daughter Divya Shasha born in 2005 in Chennai. His children are also interested in acting and made cameo performance in Vijay’s Movies. 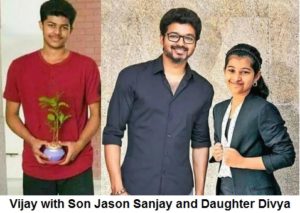 List of Joseph Vijay Best Movies in the Tamil Language: 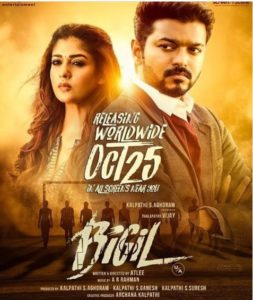 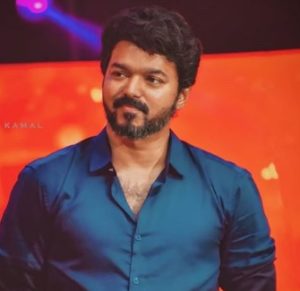 Actor Vijay made his singing debut by with the song Bombay City Sukkha Roti in 1994 in Rasigan Movie. He won the Title Favorite Song of the Year 2012 for the song Google Google in Thuppakki. Joseph Vijay has nominated for SIIMA Award for Best Playback Singer, Filmfare Award South in the Best Playback Singer Category for the following songs:

Recently, Vijay has sung a song Verithanam for Bigil Movie in 2019. This song is directed by A.R. Rahman.

Tamil Actor Joseph Vijay has been featured in the following ads:

The M.G.R Educational and Research Institute (Dr. M.G.R University) has provided an Honorary Doctorate Degree to Actor Joseph Vijay in 2007. He got this honor for his contribution to Social Welfare and achievements in Tamil Cinema.

Joseph Vijay is also awarded Kalaimaamani Honor in 1998 for excellence in the field of Arts and Literature.

Besides, Vijay has won many awards in Tamil Film Industry. Click here to know about the list of Awards won by Vijay.

Who is Joseph Vijay?

Actor Vijay is a superstar of Tamil Cinema.

What is the full name of Tamil actor Vijay?

The full name of Vijay is Joesph Vijay Chandrashekhar.

Who is popular as Thalapathy in South India Cinema?

The fans of Tamil actor Vijay call him Thalapathy, which means the Commander.

What is the age of actor Vijay?

Who is the father of Joseph Vijay?

Tamil Films Director S. A. Chandrasekhar is the father of actor Vijay.

Who is the mother of actor Vijay?

Tamil Playback Singer and Carnatic Vocalist Shobha Chandrasekhar is the mother of Vijay.

What happened to the sister of actor Vijay?

Joseph Vijay had a sister named Vidhya Chandrashekhar who died at the age of Two Years. His sister’s death affected him a lot. As per his mother, Vijay was very Naughty and Talkative as a Child. But, after Vidhyas Death, he became silent. The story of Vidhya is depicted in the movie Sukran in 2005.

Who is the wife of Joseph Vijay?

Sangeetha Sornalingam is the wife of Vijay. She is a Hindu Sri Lankan Tamil. Both met in UK and fell in love.

How many children have Vijay Thalapathy?

Joseph Vijay is blessed with two children: son Jason Sanjay born in 2000 in London and a daughter Divya Shasha born in 2005 in Chennai.

What is the net worth of Joseph Vijay?

The estimated net worth of actor Vijay is $64 Million.