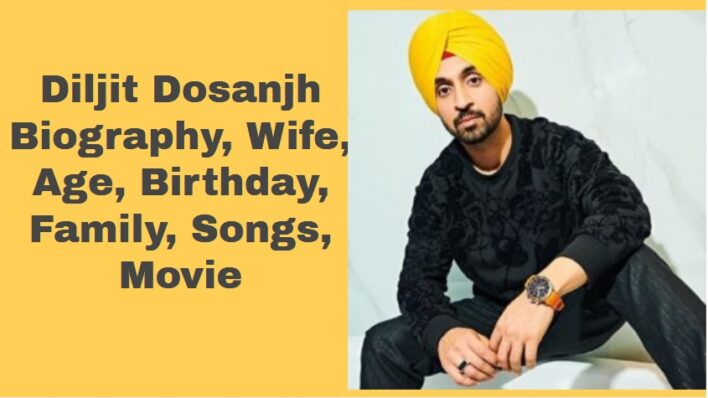 Diljit Dosanjh is a very popular Punjabi singer and actor. Besides Punjabi movies, he has also acted in Hindi Movies like Udta Punjab, Phillauri, and the recent one is Good Newwz with Akshay Kumar and Kareena Kapoor.

We have also activated links to Diljit Dosanjh Instagram, Facebook, Twitter accounts, and Wikipedia Page. So that you can easily follow him. Just continue reading and scroll down till the end of this page.

Diljit Dosanjh started his career as a Punjabi singer in the year 2003-04 with the album Ishq Da Uda Adaa and Dil. Both albums were a big hit. From 2004-2010, he gave many hit albums and hit songs. His album Smile released in 2005 with songs Nachdiyan Alharan Kuwariyan and Paggan Pochaniyan Wale were very popular.

He started his acting career with the Punjabi Movies in 2011 with the movie Lion of Punjab. This movie was a flop. But, later, he acted in many successful Punjabi movies like Jatt & Juliet, Jatt & Juliet 2, Sardaar Ji and Sardaar Ji 2, Punjab 1984, Ambarsariya, Super Singh, Soorma, Sajjan Singh Rangroot, and Shadaa.

He is also a television personality as he was a judge on singing Reality Show Rising Star for season 1, 2, and 3. He has also appeared as a guest on many reality shows like Voice of Punjab on PTC, Comedy Nights with Kapil, The Kapil Sharma Show, Koffee with Karan Season 6, Fear Factor: Khatron Ke Khiladi 9.

Diljit Dosanjh was born on 6th Jan 1984 in village Dosanjh Kalan, Phillaur Tehsil, Jalandhar District, Punjab, India. His age as in 2020 is 36 years.

His father Mr. Balbir Singh Dosanjh was a Bus Driver in Punjab Roadways and his mother’s name is Sukhwinder Kaur. She is a homemaker. Diljit has one elder sister and one younger brother Manjeet Singh. He started his singing career by performing Kirtan at the local Gurudwaras.

The Punjabi Singer Diljit Dosanjh keeps his personal life a secret. Especially his marital status. We want to tell you that Diljit Dosanjh is married. His wife’s name is Sandeep Kaur Dosanjh. Both are blessed with a son. His wife and his son live in the USA.

Here in the video, he is sharing an incidence of why he kept his family and personal life secret:

PTC Punjabi Music Awards: Check the list of songs from Diljit Dosanjh Wikipedia Page. The link is activated in the table given below.

From time to time, we will update this section with the latest information related to Diljit Dosanjh. Just stay connected with us.

What is the real name of Diljit Dosanjh?

His real name is Diljit Singh and he uses the name of his native village Dosanjh Kallan as his surname.

Where is Diljit Dosanjh from?

What is the age of Diljit Dosanjh?

Who is the wife of Singer Diljit Dosanjh?

He keeps his personal life secret. Yet, the sources said that he is married to Sandeep Kaur, who lives in the USA. Both are blessed with a son also.

What is the net worth of Diljit Dosanjh?

His net worth is expected to be $16 Million.

Does Diljit Dosanjh own a private jet?

Yes, he owns a private jet and informed his fans about this in April 2017 through twitter.