Devoleena Bhattacharjee is popular as Gopi Bahu from Sath Nibhana Sathiya(Star Plus Show). Now, your favorite Gopi Bahu can be seen in the Bigg Boss 13 House. Sadly, she quit the show in mid because of her back pain and surgery issues.

She is a brilliant Indian Television Actress. Besides, she is a very good dancer also. Devoleena is a trained Bharatnatyam Dancer. The first time she was noticed on TV in Dance India Dance 2 Auditon among 100 top contestants.

Popular Indian Television Actress Devoleena Bhattacharjee was born on 22nd August 1990 in Sivasagar, Asaam, India. As the surname suggests, she belongs to a Bengali Family. Now, she lives in Mumbai with her mother and brothers. She did her schooling from Assam and then came to New Delhi for Higher Studies.

The first time, she faced the camera for the audition for Dance Indi Dance Season 2 as she is a trained Bharatnatyam Dancer.

She made her acting debut on TV with a supporting role in NDTV Imagine’s Sawaare Sabke Sapne Preeto as Bani. Later, she replaced Gia Manek and got the role of Gopi Ahem Modi in Sath Nibhana Sathiya on Star Plus in 2012. Now, she is ready for a memorable journey in the Bigg Boss 13 House. 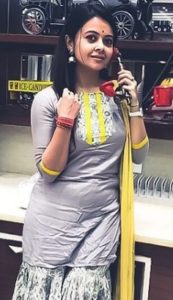 Affair: There were rumors that Devoleena Bhattacharjee (aka Gopi Modi) and Vishal Singh (aka Jigar Modi – Devar of Gopi Bahu) are in a relationship. But, now they are not even friends. 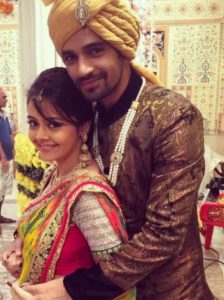 One interesting fact about Devoleena Bhattacharjee aka Gopi Modi is that she is a Tattoo lover. She has lots of tattoos on her body.

On her back, there is an Infinity Symbol Tattoo with lyrics – Faith and Family. 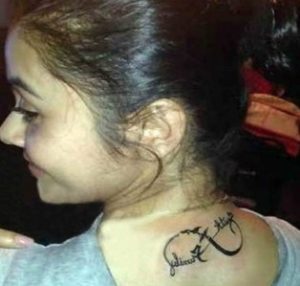 In the Waist, there is a Lotus Flower made with Tattoo.

Devoleena has an Om symbol Tattoo on her left wrist. 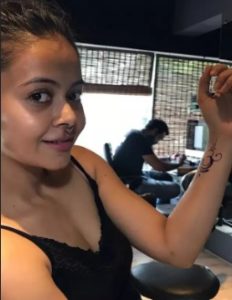 She has a tattoo on her left foot showing Leaves and Birds and lyrics – Every Breath is a choice, the optimist.

One more tattoo is on her left side midriff written free spirit. 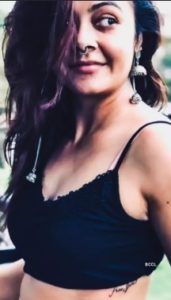 For the first time, she was on television as a contestant of Dance India Dance Season 2. She was in Top 100 Contestants in 2010. She got a supporting role in NDTV Imagine Drama Show – Sawaare Sabke Sapne Preeto in 2011-2012. From 2012 to 2017, she played the role of Gopi Ahem Modi in Star Plus Show Sath Nibhana Sathiya. In 2018, she was in Episodic Lead Role on &TV presents Laal Ishq. Now, in 2019, she is ready to entertain us in Bigg Boss 13 as a Contestant.

One more fact about Devoleena Bhattacharjee is that she is a very nice singer also. She has recorded her Hindi song – Hey Gopal Krishan Kru Aarti Teri in 2017 and Assamese Songs – Ramdhenu with Vreegu Kaxyap in 2019.

She has won many awards for her character Gopi Bahu in Sath Nibhana Sathiya. Here is the list of awards won by Devoleena Bhattacharjee:

Here is the list of controversies connected with Devollena Bhattacharjee aka Gopi Bahu.

This is the latest controversy associated with Devoleena Bhattacharjee. A Diamond Merchant Rajeshwar Udani, a resident of Mahalaxmi Society in suburban Ghatkopar was missing since 27th November 2018. Later, his dead body was found. About this murder case, Devoleena Bhattacharjee was summoned by the Mumbai Police after her phone number found in Call Records of Rajeshwar Udani. She was interrogated for hours and then she informed her fans that everything is fine. It was a normal interrogation as I know the murdered person. But, She has not got the clean chit yet and can be called anytime for further investigation.

The name of the pet dog of Devoleena was Jugnu. Jugnu was a friendly dog on the sets on Sath Nibhana Sathiya. One day that dog was missing. After finding Jugnu for two days, she got to know that the actress Utkarsh Naik was last seen with Jugnu. She wanted to take the dog in her car.

Devoleena accused Uttkarsh of kidnapping her dog. She also filed a complaint against her in PETA. Miss Bhattacharjee was very close to her dog. She also made a WhatsApp group I want Jugnu Back and spread the message of the missing dog.

Here is Utkarsh Naik Verdict after allegations by Devoleena: “yes, I wanted to take Jugnu for a medical examination. Since the dog was friendly with me, I needed to take the dog to a vet as she was on warmth. In this way, I attempted yet the dog would not fit inside the car. I dropped the dog at the door. I was intending to take the dog by calling the ambulance. Since that day the dog is missing and I do not understand where the pet has gone. Where and for what reason would I take Jugnu with me? I am into animal welfare myself and this unjustifiable what is being spread about me.”

In Jan 2016, Devoleena was rehearsing her script on the set of Sath Nibhana Sathiya with the director. Vishal Singh aka Jigar Modi and Vandana Vithlani (aka Urmila Modi) were cracking jokes and giggling sitting near her. A this, Devoleena lost her temper and started shouting at Vandana in front of everyone. Vandana felt insulted and started crying.

At this, Vishal told Devoleena not to shout at a Senior actress. At this, Devoleena shouted at Vishal Singh. She told him that her comment was not directed to him so he should shut his mouth. After that, both started hurling abuses at each other. They have now unfriended each other on social media as well. Once their friendship was the talk of the town.

Final Words: It will be interesting to see Devoleena Bhattacharjee aka Sanskaari Gopi Bahu in Bigg Boss 13 House. Her fans must be waiting for her new and hot Avatar in Bigg Boss Season 13.

What is the age of Devoleena Bhattacharjee?

Who is the husband of Devoleena Bhattacharjee?

At present, she is not married.

What is the height of Devoleena Bhattacharjee?

Who is the boyfriend of Devoleena Bhattacharjee?

She is single and not dating anyone. Earlier, there were rumors that her co-actor Vishal Singh is her boyfriend and later they broke up.

Is Devoleena Bhattacharjee Bengali or Assamese?

Her father is a Bengali Brahmin and mother is an Assamese.