Read about Chandro Tomar (aka Shooter Dadi) – the oldest shooter in the world. She belongs to Uttar Pradesh.

Here, we are telling you about her journey of becoming a sharpshooter at the age of 60 years. We will also tell you about her achievements and medals won in the Shooting Field. 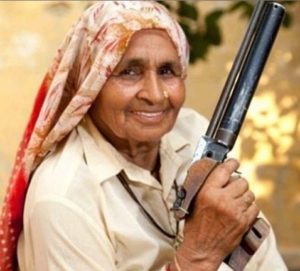 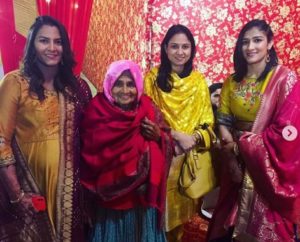 One Biographical Movie is also picturized on the lives of Dadi Chandro and Prakash Tomar. Read everything about Chandro Tomar Shooter through this page.

Chandro Tomar is an old sharpshooter and National Award Winner in the field of shooting. She belongs to a small village of Johri in Bhagpat District, Uttar Pradesh, India.

She started learning to shoot in the year 1999 after the age of 60 years. Not, she has turned 87 years old and has won more than 30 national championships.

Chandro was born on 1st January 1932 in Shamli, UP. She belongs to Jat Community. She is illiterate as she never attended any school. But, she is a great learner when it comes to Sharpshooting and basic English. She is also using Social Media and has an account on Facebook, Instagram, and Twitter. Recently, she has also made a Youtube Channel – Chandro Tomar – Topic on 17th Feb 2019.

In the family of Chandro Tomar, there are 8 children and 15 grandchildren. It is an interesting story about how Dadi Chandro Tomar became the Shooter Dadi:

Once, Chandro and her sister-in-law Prakashi Tomar accompanied her granddaughter Shefali Tomar to the Johri Rifle Club. Shefali was feeling shy to attend the club as there were all boys at the shooting club and she was the only girl there. 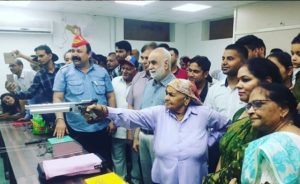 At the range, when Shefali Tomar was unable to load the pistol, Dadi Chandro took the pistol and started shooting the Target. Her first shot was the Bulls Eye Hit. After that, Prakash Tomar also hit the target skillfully. The Club Coach, Farooq Pathan, was amazed to see them shooting so skillfully. He suggested bot the of them to learn shooting seriously and become a National Level Sharpshooters.

Chandro Tomar and Prakash Tomar used to attend the shooting classes once a week. Their hard work and consistency in learning has provided them recognization at the National and International level.

Dadi Chandro Tomar is known to the Oldest Sharpshooter in the World.

Now, Chandro Tomar is famous not just in her village Johari, but also in India and in the world because of their talent and hard work. Dadi Chandro belongs to Jat Community. She wears the traditional Ghaghra, Shirt, and Dupatta while participating at the National and International level competition. 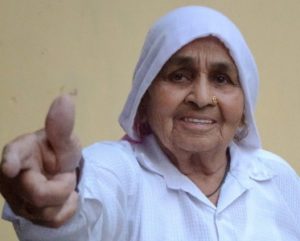 Since 1999. Chandro Tomar has participated in 25 National Championships in India and has won in all competitions. She has also won Gold Medal at the Veteran Shooting Championship organized in Chennai.

Dadi Chandro is a role model for everyone who wants to make their career in shooting field. Because of her popularity, local people and her daughters are interested in making a career in the Shooting Sport. 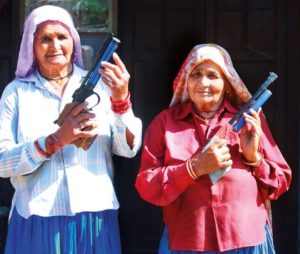 Now, shooting runs in the family of Chandro Tomar. Her niece Seema Tomar is a Sharp Shooter, who won a medal at the Rifle and Pistol World Cup in 2010 for the first time. Her Granddaughter Shefali Tomar has also become an International Level Shooter. Both of them give credit of their success to Chandro Tomar and Prakash Tomar. 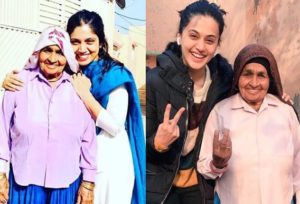 Chandro Tomar is the oldest sharpshooter and the National Award Winner in the field of shooting. She started learning to shoot in the year 1999 after the age of 60 years. Not, she has turned 87 years old and has won more than 30 national championships.

What is the age of Chandro Tomar?

Who is famous as Shooter Dadis in India?

Chandro Tomar and Prakashi Tomar are known as Shooter Dadis in India.

What is the relation of Chandro Tomar with Prakashi Tomar?

Where is Chandro Tomar from?

Chandro Tomar was born in Shamli Village, Uttar Pradesh. After marriage, She belongs to a small village of Johri in Bhagpat District, Uttar Pradesh, India.

What is the net worth of Chandro Tomar?

We don’t have any information about Chandro Tomar Net Worth.