Every year at the launch of Bigg Boss, Salman Khan appears in new avatars. Sometimes, he is seen as a Pilot, a singer, a gardener, and sometimes as a mischievous neighbor.

That is why the Big Boss Followers are curious to know what will be the theme of Big Boss 13 and in which Avtaar they will see their favorite Big Boss Host Salman Khan.

The biggest TV Reality Show Bigg Boss Season 13 is extended for 5 weeks. So, 3 new wild card entries are made i.e. Shefali Bagga, Arhaan Khan, and Madhurima Tuli. It may possible that Salman Khan will leave the show as a host because of the extension. Who will be the new host of Bigg Boss 13? is a big question. We will keep you updated about this. Just stay connected with gulabigangofficial.in and like our Facebook page. Thank you. 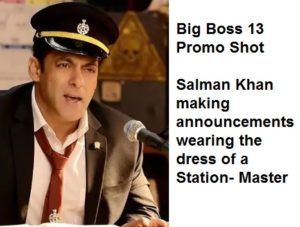 Today we are here to inform you about Big Boss 13 Promo Shoot. Before going to Jaipur for the shooting of his movie, Salman Khan has recorded four promo shoots for Big Boss 13. Out of which, Big Boss 13 First Promo Shot has been released on Saturday i.e. 24th August 2019. In this promo shoot of Bigg Boss 13, Salman Khan can be seen as a Station Master.

Salman shot 4 promos for Bigg Boss season 13 before shooting for his upcoming film to Jaipur. Salman was seen sitting in a cabin wearing a station master’s dress. This cabin will look trembling due to fast passing trains. This 30 seconds promo of Big Boss 13 was released on Saturday. It is believed that the new season will be on the concept that it will move at a fast pace.

Here are the lyrics of Big Boss 13 First Promo Shot:

If we simplify the wording of Salmaan Khan in this promo, we can expect that the contestants will be celebrities only and the Big Boss 13 will reach its finale in four weeks. 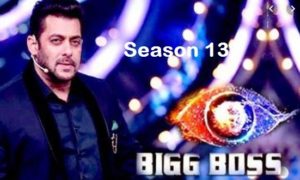 Another interesting thing about the Big Boss show is its theme. Last Year, the theme of Big Boss 12 was vichitra jodi in which contestants enter as a Jodi like Anoop Jalota-Jasleen Jodi. But, last season was not good on TRP. So, this time, show-makers are gearing up for making show more interesting. 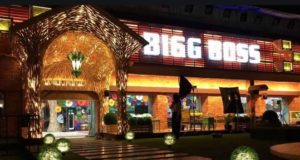 Talking about the theme of Bigg Boss 13, it may be a Horror and Drama Theme. As this is the 13th season of Big Boss and Number 13 is often associated with Haunted things. So, It is expected that the Big Boss 13 theme will be a mix of horror and drama. The discussions about this horror theme re still on and there are more chances of the finalization of Horror Theme for Big Boss 13. It may also possible that the Bigg Boss 13 Theme will be a War Theme as Colors TV Tweeted #BB13War.

This time Bigg Boss house will also be in Goregaon, Mumbai instead of Lonavala. All Seasons of Big Boss, except Big Boss 5, were shot at Lonavala.

The popular reality show ‘Bigg Boss 13’ is coming soon on the small screen. The previous season of the show did not manage to impress the viewers, given that the makers have decided to do something different this time. It is being said that this time Bigg Boss will be more lively. According to sources, Bigg Boss will be on air by the end of September this year. 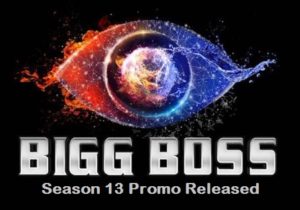 Bigg Boss 13 can premiere on 29 September 2019. The house of Bigg Boss 13 has started to be built in Goregaon Film City. At the same time, according to some reports, Salman Khan wants the female host in the show and he has also suggested this to the show’s makers.

If sources are to be believed, this time only celebrities will be part of the Bigg Boss house. Last time the door of this house was also open to the common people. It is believed that so far Chunky Pandey, Siddharth Shukla, Devoleena Bhattacharjee, Aditya Narayan, Mihika Sharma, Mugdha Godse, Rajpal Yadav, Richa Bhadra have been approached to be contestants.

Everyone is eager to know about the Big Boss 13 Contestants List. Recently, an alleged list of approached contestants of Bigg Boss 13 was leaked, which includes the names of 24 celebrities:

The list also included names like boxer Vijendra Singh, Zarine Khan, Ritu Berry, Himansh Kohli, Ankita Lokhande, rapper Fazilpuria and Neha Kakkar’s ex boyfriend Himansh Kohli. All these stars have denied the news of being part of Bigg Boss house. On the other hand, Mahika Sharma and Devoleena Bhattacharjee say that it is too early to say anything.

Our team of gulabigangofficial.in will provide you all the Big Boss 13 Updates from time to time. We will also provide you the complete Biography of finalized contestants of Big Boss 13. Give your feedback in the comment section given below. Thank You.