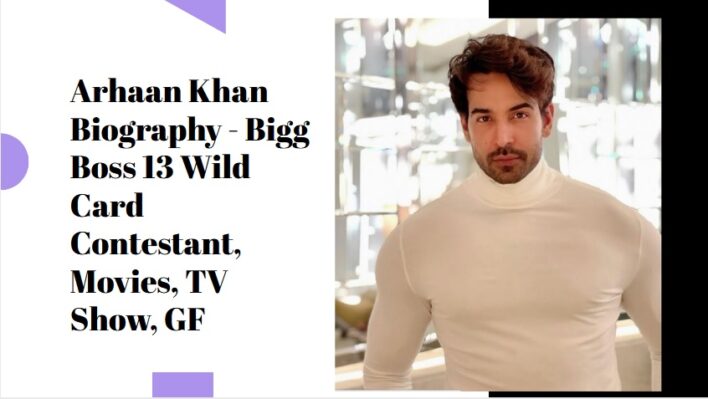 Arhaan Khan is a model and actor in India. He started his career as a model. As an actor, he has acted in a TV Show Badho Bahu and in a Telugu Movie Srivalli. Now, he has entered the Bigg Boss 13 House as a Wild Card Contestant. He was evicted from the show once and made an entry again as a wild card contestant for the second time. But, his journey of Bigg Boss 13 was not ended happily. His personal life and truth of his marriage and child came in front of everyone. Now, Rashmi Desai had ended her relationship with Arhaan Khan on national television.

We have updated this article with the latest information related to Arhaan Khan Wife, Child, Son, Family, and Ex-Girlfriend Amrita Dhanoa. Just continue reading. In adition, we have also added the video in which Arhaan Khan is making some shocking revealation about Rashmi Desai to Shefali Bagga.

Latest Updates Bigg Boss 13: The biggest TV Reality Show Bigg Boss Season 13 is extended for 5 weeks. So, 3 new wild card entries are made i.e. Shefali Bagga, Arhaan Khan, and Madhurima Tuli. It may possible that Salman Khan will leave the show as a host because of the extension. Who will be the new host of Bigg Boss 13? is a big question. We will keep you updated about this. Just stay connected with gulabigangofficial.in and like our facebook page. Thankyou.

Arhaan Khan entered as a wild card contestant and was evicted due to less number of votes. After his eviction, he said that he has performed well in the task, yet he is evicted. He also informed in an interview that he will propose Rashmi Desai in the Bigg Boss 13 House if he is given a chance to re-enter the Bigg Boss House.

Well, Bigg Boss has fulfilled his wish and called him as a wild card contestant for the second time in the Bigg Boss 13 House. The show is extended for five weeks and he has got a chance to show his love for Rashmi Desai.

We have also activated links to Arhaan Khan Instagram, Facebook, Twitter accounts, and Wikipedia Page. So that you can easily follow him. Just continue reading and scroll down till the end of this page.

Surprisingly, we have got some shocking information about Arhaan Khan. His real name is Mazhar Shaikh and his nickname is Arhaan and Khan is his maternal surname. He has father, mother, sisters, wife, and son in Arhaan Khan’s Family. His family lives in Jaipur, Rajasthan. His father deals in Diamond Business and wants Arhaan to join their family business. His family does not support him for his acting career.

Arhaan Khan is married and his wife is living in Jaipur. Their divorce is in process. Arhaan Khan has a son also. He is dating actress Rashmi Desai who is his co-contestant in Bigg Boss 13.

His Ex-Girlfriend Amrita Dhanoa is making so many alligations on Arhaan Khan. She has also filed a Police Complaint against him in Oshiwara Police Station for not repaying Rs. 5 Lakhs which she lent her.

Surprisingly, Salmaan Khan has revealed shocking truths about Arhaan Khan’s Personal Life on the Weekend ka War on 7th December 2019. In the Bigg Boss 13 House, Arhaan Khan proposed Rashmi Desai with a ring. At this, Salmaan Khan told Rashmi that Arhaan Khan is married and has a child. Rashmi was shocked as she was aware of the marriage but not the child. Moreover, Salman Khan has also indicated a bit about Arhaan Khan Loan. By saying so, he is indicating about Amrita Dhanoa’s Alligations made on Arhaan Khan.

A few videos of Amrita Dhanoa are trending in social media. In these videos, she is blaming Bigg Boss 13 Contestant Arhaan Khan for misusing his money, not paying his debt. She has also shown a copy of a Police Complaint that she has filed against Arhaan Khan in Oshiwara Police Station.

Arhaan Khan was born on 12th May 1988 in Jaipur, Rajasthan, India. His age in 2019 is 31 years. By profession, he is an actor and model. He has worked in many ad commercials and participated in many fashion shows.

His first TV Show was Badho Bahu on &TV. In this TV Serial, he portrayed the role of Rana Ahlawat from 2016-2018. His debut movie was a Telugu Movie Srivalli in 2017 and his character name was Majnu.

Arhaan has a very good sense of Fashion. In 2017, he was a judge at the Glamx Mr. and Miss India Youth Icon.

Recently, he has made a wild card entry in the Biggest Reality Show of Television Industry i.e. Bigg Boss Season 13. It was in the news that he is BF of Rashmi Desai and will make a wild card entry in the show. But, he has clarified that he and Rashmi are very good friends and not more than that. Rashmi Desai is evicted the same day he has entered the Bigg Boss House.

He has a rivalry and direct competition with Siddhartha Shukla in the show. It will be interesting to see his journey in the Bigg Boss 13.

The journey of Arhaan Khan in Bigg Boss 13 house is like a rollercoaster ride. He entered as a wild card contestant and got evicted very soon. After that, he again re-entered the Bigg Boss 13 Hosue and proposed Rashmi Desai. Now, On 7th December 2019, in the weekend ka war, Salmaan Khan exposed him about his marriage and child in front of everyone. Salmaan Khan entered the Bigg Boss House to sort the matter between Rashmi Desai and Arhaan Khan.

Now, in an episode, Arhaan Khan is telling Shefali Bagga that he loves Rashmi Desai so much. He has stood up for her in every situation. If he wins the trophy of Bigg Boss 13, he will give to Rashmi as she is more deserving. In addition, he also said, when he met Rashmi two years ago, she was on road financially. She had zero balance in her account and no work assignments to do. He supported her at that time and helped her overcome those hard times.

On the other hand, Rashmi is unaware of this conversation of Arhaan Khan and Shefali Bagga. Because she was working in the kitchen at that time.

You can also read about Arhaan Khan from his website i.e. arhaankhan.in

Stay connected with us i.e. gulabigangofficial.in. We provide the biography of other celebrities, politicians, sports persons, and other famous personalities. Mention the name of your favorite celebrity in the comment section given below. Like and follow our Facebook Page. Thank You.

What is the real name of Arhaan Khan?

His real name is Mazhar Shaikh.

Who is Arhaan Khan’s father?

His father is a diamond merchant.

What is the age of Arhaan Khan?

Yes, he is married and his wife stays with his family in Jaipur, Rajasthan.

Does Arhaan Khan have a child?

Yes, he has a son with his wife who stays in Jaipur.

What is the relation of Arhaan Khan and Amrita Dhanoa?

Amrita Dhanoa claimed to be in a relationship with Arhaan Khan. But, Arhaan Khan denied the claim.

What is the relationship status of Arhaan Khan and Rashmi Desai?

Rashmi Desai has broken up with Arhaan Khan after knowing the truth of his marriage and child in Bigg Boss 13.